The Stars From The Commitment 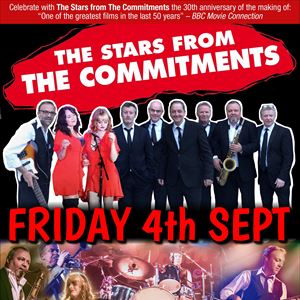 All The Stars From The Commitment performances

14+ only. 14s to 17s must be accompanied by an adult. No refunds will be given for incorrectly booked tickets.

Celebrate with The Stars From The Commitments

The 30th anniversary of the making of: “One of the Greatest films in the last 50 Years” – BBC Movie Connections

The show consists of two hours of sizzling soul music – and is a thrilling live experience that will stir your soul. The 'Stars' perform all the hits, including 'Mustang Sally', 'Midnight Hour', 'Chain Of Fools', 'Treat her Right', 'Try A Little Tenderness' and many more. They've entertained audiences world-wide performing at festivals, clubs, theatres, high profile corporate events and VIP parties, including for a US President and receiving rave reviews from fans, music critics and promoters.

The Stars from The Commitments have performed many times at The Robin 2 and it’s always an absolute pleasure to be going back, it’s a fantastic venue with some of the best audiences in the world and we look forward to seeing you on the night: Kenneth McCluskey – AKA Derek “The Meatman” Scully

Dan Aykroyd of The Blues Brothers said, "The Stars From The Commitments show is the best soul review I have ever seen or heard".